It is hard to believe that a year has passed since I was brought on as the Executive Director of the Agricultural Drainage Management Coalition. I would like to take some time to thank all our members, the ADMC board, the officers, and Jeanne for your dedication to the coalition and for making me feel welcome from the start.  Much of my first year has been spent raising the profile of ADMC to get recognition that the current membership deserves for its dedication.

I was fortunate to take a Midwest winter LICA meeting tour to present ADMC’s work at the Ohio, Indiana, Illinois, Iowa, and Minnesota meetings. ADMC was on the steering committee and acted as a contracted facilitator for the Illinois Nature Conservancy and the Illinois Sustainable Agricultural Partnerships Advanced Conservation Drainage Training (ACDT). The ACDT conducted summer workshops to train a cohort on the benefits and processes behind getting conservation drainage implemented throughout the state of Illinois. ADMC was invited to speak at multiple field days in Minnesota and Iowa, including a recent Cannon River Watershed Partnership field day which is discussed later in this newsletter. I was also invited to educate landowners, farmers, agencies, and scientists on the potential of conservation drainage at workshops in Minnesota and South Dakota.

ADMC presented at the Annual Soil and Water Conservation Society (SWCS) International Meeting that was hosted in Pittsburgh, PA this summer on the scalability and impact of saturated buffers throughout the Midwest. The topic was of great interest as it was the 2nd most attended break out session of the 500+ person conference. The agenda is being built for the 2020 SWCS conference hosted in Des Moines, IA. The conference will be a prominent event as it will be the 75th anniversary of the society. Even though the agenda is not finalized, conservation drainage is likely going to be prominent due to the amount of work occurring in Iowa. There will be many opportunities for ADMC and its members to feature their work.

ADMC also captured valuable earned media this year from the FSA saturated buffer study that was wrapped up last winter. ADMC was featured in stories from, but not limited to, the Drainage Contractor, Ag Update, High Plains Journal, Agriculture.com, and the Progressive Farmer. 4R Plus also ran a feature on ADMC which was widely distributed.

This upcoming year is going to focus on expanding membership to those who benefit from the coalition’s charge. A push to expand implementation already occurring in Iowa and Minnesota, while getting states like Illinois and Indiana to start taking more advantage of federal and state programs available will be made. A new scenario for EQIP to utilize automated control structures will likely expand the use of controlled drainage, especially in Ohio, Indiana, Illinois, Minnesota, and North Dakota.

Once again, thank you for what last year brought, and I look forward to new things to come in the upcoming year.

Please let Jeanne Hansen know if you plan to attend so that we may plan accordingly. jhansen@admcoalition.com or by phone at (507)451-0073

Structural edge of field (EOF) practices have been identified as critical components of many nutrient loss reducing strategies throughout the Midwest, yet implementation to this point has been mainly ad-hoc. ADMC wants to accelerate adoption of these practices by expanding the partnerships with public agencies that facilitate the funding for the practices.

The following factors are four of the biggest barriers to adoption:

The partnership with the Polk County SWCD looks to address the four factors by using the following framework (Figure 1) to increase the adoption rate to a minimum of 25 sites over the next year in Polk County. The financial and administrative strengths of the conservation district will be leveraged with the outreach and technical experience of ADMC. The partnership frees the district to focus on other priority resource concerns while allowing them to become more comfortable in the edge of field site selection, design, and implementation process. 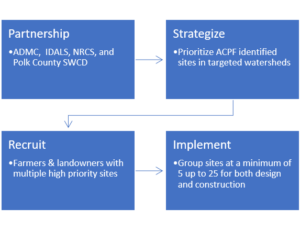 Specific watershed areas within Polk County will be targeted to utilize planning efforts and funding advantages due to the watersheds being selected as state Water Quality Improvement watersheds. Part of the planning efforts in the selected watersheds include the use of the Agricultural Conservation Planning Framework (ACPF). Among other outputs of ACPF, the tool identifies sites that are potentially suitable saturated buffer sites. ADMC will work with Polk County SWCD to prioritize ACPF identified sites based on sites that will require minimal management, have a filter strip in place, and have sufficient drainage areas to make the investment into the practice worthwhile. Landowners and farmers with the most sites ranking high in the ACPF prioritization will be recruited to implement the practice and encourage to adopt more than one saturated buffer if appropriate. To improve the efficiency and cost of design and implementation, sites are going to be bundled or packaged together for design and construction. The goal is to drive down the design expenses by combining sites to be surveyed into the same trip. Bundling the sites for construction will make them a higher priority for contractors.

Mark Morreim of Morreim Drainage Inc. recently installed a bioreactor in Waseca County Minnesota. Mark had been attending field events and workshops to gather as much information as possible to ensure the installation went well for his customer.

ADMC was invited to participate in a Cannon River Watershed Partnership (CRWP) field day near Northfield, MN on September 16th. I met the CRWP Conservation Program Manager Alan Kraus, who extended the invite to ADMC, at a July McKnight Foundation Farm Bill event. I partnered with Heidi Keuler, Fishers & Farmers Partnership for the Upper Mississippi River Basin Coordinator, to present the benefits of conservation drainage practices and two-stage ditches. Heidi demonstrated the U.S. Fish and Wildlife Service’s stream trailer. The trailer circulates water from two reservoirs and allows the water to drain through various sized recycled plastic pellets to provide insight into stream geomorphology. In the scenario at the field day, Heidi and I demonstrated how two-stage ditches prevent bank collapse when compared to conventional trapezoid ditches at similar flows.

The CRWP is an active watershed group and the watershed itself has submitted a plan for 90-day review through Minnesota’s One Watershed, One Plan program.  The plan accounts for 929,000+ acres in Rice, Steele, Goodhue, Dakota, Le Sueur, and Waseca counties. Drainage water management and saturated buffers are both practices that will be focused on in the Straight River Tributaries and the Lake Areas. 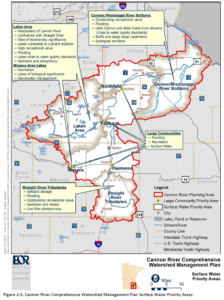 ADMC is on the 2020 annual meeting organizing committee for the organization formally called the Agricultural Drainage Management Systems Task Force (ADMS-TF) and participated in a conference call at the beginning of the month to start the planning. The first order of business was to recommend a new name for the organization as the ADMS-TF was formed as part of a USDA Partnership Management Team (PMT) in 2003. The task force was meant to provide a structure where the NIFA and ARS research agencies could share research with the NRCS. A new path forward was needed as the PMT structure no longer exists and many other partners have began participating. As Dr. Jane Frankenberger, Purdue University, outlined in this google doc, a the new structure going forward was approved at the 2019 ADMS-TF meeting.

The organizing committee recommended the name of the organization be changed to the Conservation Drainage Network. The 2020 meeting is currently set to take place in Fort Wayne, IN on June 3rd and 4th. There will likely be field tours during the meetings. If you have suggestions of where tours should take place or speakers that you would like to hear from, please let me or other organizing committee members know.